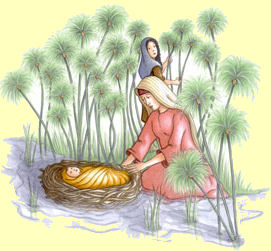 Prophet Muhammed (S.A.W) described her as one of the four most pious women in the world and will be one of the first to enter Paradise.


Asiya (R.A.) was the wife of the Egyptian Pharaoh who ruled Egypt in ancient times. She was a beautiful and gentle Queen who had a very good heart, thus he loved her dearly. Although, this Pharaoh was a tyrant King who killed the innocent and imprisoned women and children because he claimed to be God and ordered all the people to worship and glorify him. If they believed in anything else, he would have them crucified.

The cradle on the Nile

One day the maids of Asiya (R.A.) found a cradle floating in the Nile river.  They brought it to her, and the baby inside it was the most beautiful one she had ever seen which made her immediately fall inlove with it. Little did she know, that this little baby boy would be the Prophet Musa (A.S.) who would guide the people to the Oneness of Allah (S.W.T.).  Yet, due to the humility of  Asiya (R.A) she was chosen by Allah to look after little Musa (A.S). Meanwhile, the Pharaoh was informed that one day a Prophet would come and overpower him and lead his people to a new creed. Immediately he became very angry and ordered all new born boys to be killed because he truly believed he was the only God. At the same time, he also loved Asiya (R.A.) so much that he would fulfill any wish of hers, so she pleaded for him not to kill the little baby boy that she had found in the river. She said “: A comfort to the eye for me and for you. Kill him not, perhaps he may be of benefit to us, or we may adopt him as a son.” And they perceived not (What they were doing) (Surah 28: 7- 9)

As years passed by, Prophet Musa (A.S.) who lived in Egypt then, would call the people to Allah’s Oneness and to establish love one earth. To this new religion, he only had a few followers, as many feared the Pharaoh and his torture. The news reached Asiya (R.A.) and she came to know about Musa’s (A.S.) new religion. She liked this new religion and her heart started to believe in it. For years she kept her beliefs a secret as she worshipped Allah under the guidance of Musa (A.S). It’s really unimaginable, the amount of fear she must have lived under for all this time, being afraid of severe punishment. She felt sorry for those who were being tortured for believing in Islam and her steadfast devotion to her husband was beginning to fade, day by day. Soon, the only thing which remained between them was a wall of hatred. Her secret was finally disclosed, and the Pharaoh attempted numerous means of leading her astray and persuaded her not to believe, but her belief just grew stronger and stronger. Nothing in the world could tear her apart from her new creed which she firmly believed in, not all the clothes, jewls or luxury that he offered her.

She turned away from his world as she was not afraid anymore and gave away her status as Queen, thus now suffering with everyone else. Ibn Anas narrates that she even ran away to seek guidance from Allah, but he found her and arrested her, and tortured her for 3 days burning her body and yet, she still said “: I reject you! And do not want anything to do with you! By now, he knew, she would not come back to him, and this enraged him so much that, he ordered his men to nail her to the ground and put a heavy boulder on her chest under the scorching sun.

During the last painful seconds of her life, she said to her Lord, “: My Lord, Build for me a home with thee in paradise, and deliver me from Pharaoh and his work, and deliver me from the unjust people.”Asiya (R.A.) has set a perfect example for us to follow, because she was a Queen and could have had anything that her heart desired. Despite this, she gave up her Throne, freedom, all the luxuries in the world just to gain Allah’s mercy so that she could have a place in Jannah. So much was her love for her religion, that when it came to her last moments, being beaten and tortured so bad, meant nothing to her, because she was wise and knew that it  was no  use being attached to this world and its luxury,  when the hereafter and its beauty  is eternal. . .


Love, Ayesha
Posted by Ayesha Sayed at 2:11 AM